When I look back over my life, I am surprised to realize how many years I have spent as a student. . . . K-12, 4 years of college, 6 years of masters-level work, 9 years on my doctoral studies. For almost half my life I identified as a student, and I can now add 11+ years as a teacher. I will hold my father partly responsible for my life-long focus because he constantly encouraged (and sometimes pushed) his five children to excel at school. Of course, the encouragement wouldn’t have stuck with me if I hadn’t experienced the joy of successful learning.

And here we are near the start of another academic year at UDTS. I say “near the start” because most of our students have already taken courses during the August residency. During our two weeks together, the new students express such an interesting combination of nervousness and enthusiasm while the returning students seem like old-hands at navigating the intense schedule of classes, worship, meals, studies, and field trips.

At this time of year, my thoughts often settle on departures and arrivals: we said fare-well to graduating students in May and then welcomed new students in August.

Earlier in the summer, I had spent some “quality time” in the International Terminal at O’Hare Airport while waiting for my luggage to catch up to me. I started out near the departure gate, observing many long hugs, some teary faces, and anxious goodbyes as the passenger began their travels into the security area. 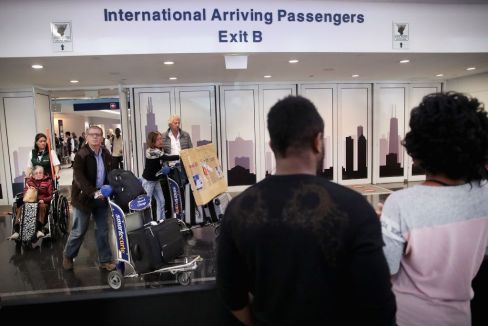 After about an hour, British Airways told me that my bag would be waiting for me downstairs at the arrivals lobby. The scenes just outside these doors showed different emotions: relief, laughter, and tears of joy. I saw smiles, balloons and flowers, and many selfies being taken.

So when I decided to preach on the story of Abram and Sarai leaving Haran (Genesis 12), I had these kinds of travels in mind. But of course, our ancestors in faith had far more and complicated difficulties than passing through U.S. Customs (although that is difficult for some). In fact, Abram and Sarai shared many of the same problems–political pressures, economic failures, military violence, famine and drought, dealing with unknown languages, customs, and cultures–faced by modern-day refugees and immigrants. It’s very appropriate to think of Abraham and Sarah as immigrants for their whole lives. (You can listen/watch the whole sermon starting at around 11:20 on this video).

Refugees of war and natural disasters are uprooted overnight with no idea of where they will go. Desperate people try to cross the U.S.-Mexican border in the desert, or they flee war-ravaged Syria by boat across the Mediterranean, leaving their possessions and familiar lives behind. Like Abraham and Sarah, their journey is full of danger and misery, even as it’s fueled by the hope of something new and better.

I have never had to suffer from this kind of travel. But I believe the Holy Spirit wants me and those in my situation to imagine what these immigrant experiences might be like for other human beings. So I have listened to the stories of the journeys from people I know.

My world has expanded because these brave believers have shared their stories of immigration and God’s faithfulness to them.

At the very least, no matter what we think about the politics of the situation on our southern border and the rhetoric in the news, I am convinced that we need

In reality, we are all sojourners, immigrants, strangers in a strange land. We are all on journeys through different and sometimes frightening places. We bump up against new languages and odd foods. We have conflicts over different opinions and behaviors. Worse than that, we encounter people who intentionally, or maybe unintentionally, shame us or even harm us. In all these situations, we find courage when we look to Jesus, who walked this same earthly journey, an immigrant from heaven, a stranger in a strange land.